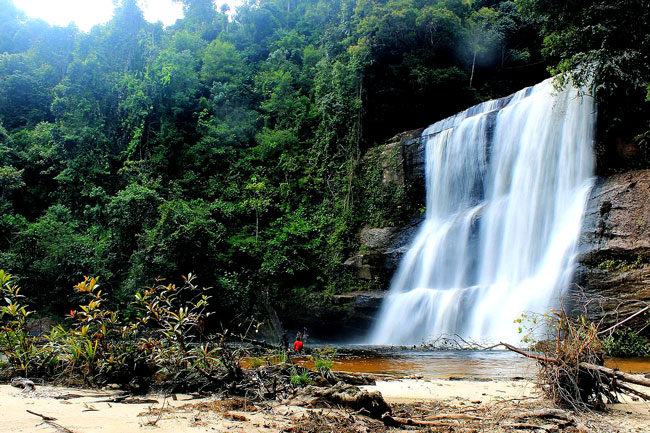 One of the biggest islands in Indonesia, Kalimantan, owns tons of stunning natural attractions. For instance, tourists can find Rombo Dait Waterfall in West Kalimantan Province. To be exact, it resides in Sekendal Village and belongs to Air Besar Sub-District. Not to mention this flawless waterfall is located in the middle of a forest! Thus, it takes some efforts to get to the location (which becomes an opportunity for trekking too among tourists). Aside from the pristine nuance and challenging landscape, the waterfall looks so gorgeous and makes it a perfect object for photography.

The Nuance
The common knowledge is that each waterfall owns its own charm. That means Rombo Dait also has several characteristics as compared to others, no? For instance, it consists of 7 layers or levels. The good thing is that tourists can explore them all! Still, the most famous level is the first one where the white sand and serene pond reside. On this site, tourists may find a majestic waterfall having the height of about 70 meters. Not to mention several plants beautify the site, creating a soothing ambiance too.

Exploring Rombo Dait Waterfall
Another name is 7-Storey Waterfall. As mentioned before, it is because the waterfall has 7 levels where tourists can explore. Despite the fact, visitors’ favorite spots are the first and second level of it. It is rare to find a person on the top of the level, after all. It is because the landscape is too difficult to reach such location. So, what can tourists find in the first two levels of Rombo Dait Waterfall? The best allure is none other than the waterfall itself, which has a widened shape.

People also come to Rombo Dait Waterfall in order to enjoy relaxation. Thanks to the pristine environment and cool water in Indonesia. Even visitors are allowed to drink the water directly due to its purity. For those who love a more challenging activity, though, they can explore the site and perform short trekking with other visitors. One thing, make sure to watch your steps during exploration. Not only there is a lush forest, but many wild animals live near to waterfall including snakes!

According to the locals, the waterfall also attracts visitors who want to enjoy bathing in nature. There is a serene pond located below the falls, after all. As for the tip, it is better to come during working days as the site gets has lesser visitors. Also, tourists should avoid coming in the afternoon or at night. The dark nuance may cause troubles when it comes to trekking for sure!

How to Get There
Despite the challenging trekking route, it is considered easy to get to Rombo Dait Waterfall. For those coming from Pontianak, Indonesia, they can directly head to Landak Regency and visit Sekendal Village afterward. The last thing to do is trekking to the site. The whole trip takes around 5 hours, as the distance is 225 km actually. For a faster trip, it is important to choose either Ahmad Yani or Lintas Kalimantan Street.