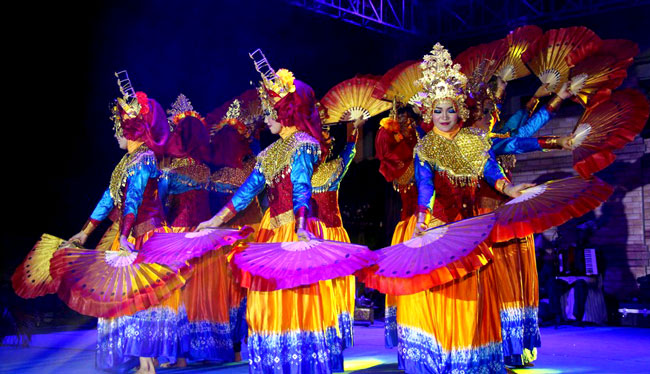 Some tourists have been aware of North Kayong Regency’s tourism values. Not only the region offers numerous natural attractions for tourists to visit, it also has several interesting cultural performances. Here is an example. The name is Kipas Melayu Dance and it has been performed regularly there. To be exact, the dance was adapted from South Sulawesi and it develops into a distinct dance in West Kalimantan Province. These days, tourists consider the dance as an extra entertainment when spending a vacation in North Kayong. It is worth watching, after all.

The Nuance
During the performance, there would be about 5-6 female dancers. They wear traditional clothes and carry fans on both hands. Not to mention several musical accompaniments add more values to the dance. When it comes to the movements, Kipas Melayu Dance features graceful movements, including the impressive play of folding fans. The major point of the movements is definitely the fans. That means dancers’ body may adapt and synchronize to those beautiful movements. According to the locals, the dance also involves several crucial rules. For instance, the dancers are not allowed to lift their feet too high and open their eyes too wide during the performance.

Exploring Kipas Melayu Dance
Aside from enjoying the movements of Kipas Melayu Dance, tourists can do other things including to learn the history of the dance itself. There is no actual information regarding the background, though. However, according to the local myth, the dance occurred due to the farewell event between those who live in Nirvana and those who live on Earth. Also, the dance becomes the medium of learning regarding farming, hunting, and breeding. Over time, people performed the dance on a regular basis and consider it an important ritual.

In the modern era, Kipas Melayu Dance has become a mere entertainment both for the locals and outsiders. Villagers usually perform it during traditional ceremonies or other important events. Not to mention they may perform it to express gratitude and happiness! As for tourists, the dance itself becomes an extra allure that they can enjoy during a vacation in North Koyong Regency. Therefore, no one should miss the opportunity to watch it during the visit later.

All parts of Kipas Melayu Dance are quite entertaining. These include the movements, musical accompaniment, and costumes. This explains why the audience feels no boredom while enjoying the performance. Even the dance is worth a photo shoot as well! For the best experience, it is better to watch it with a local guide so he can tell the history and meaning of the dance to you. What a great experience!

How to Get There
The prime destination is definitely North Kayong Regency. From Pontianak City, the trip may take approximately 5-6 hours. It is indeed a long trip, so make sure to come in a good stamina. For a faster trip, it is recommended to take the best transportation service and use the right route (which is Ahmad Yani Street).